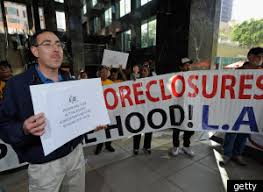 LOS ANGELES — Arturo De Los Santos and his wife Magdalena have been fighting to keep the home in Riverside, California, where they raised their four children and on which they have pinned their hopes and dreams.

Barring a last-minute miracle, the sheriff is set to evict them Tuesday morning. But De Los Santos and his family say they are not going anywhere.

Chase’s foreclosure department put the house, located at 3270 Layton Court, up for sale, even as the bank’s own loan modification department was finalizing an agreement that would have allowed the family to stay put.

«They have a department of loan modification and a department of foreclosure, which is stronger,» Arturo De Los Santos told The Huffington Post this weekend, switching back and forth between English and Spanish. He says he is both upset and disgusted because two weeks after receiving an eviction notice, his request for a loan modification was approved, but by then, he was unable to get his house back.

The De Los Santos family epitomizes the growing number of people who work hard, follow the rules and achieve the American Dream, only to see it crumble into a nightmare. After reaching an agreement to make reduced payments on a trial basis until a final settlement was defined, and making three payments in accordance to that agreement, «the loan modification department didn’t accept my money. They said, we are not accepting more payments,» said De Los Santos.

He was left in limbo. At the same time, «the foreclosure department didn’t know they had told me that,» he said. «They just thought I was not paying.» The bank returned the fourth check, un-cashed.

«These are errors due to a particularly floppy organization and bad information. Sometimes they make you wonder if they had any intention of giving a loan modification to people that qualify,” said Peter Kuhns, an activist with the Alliance of Californians for Community Empowerment.

De Los Santos said that Chase then told him to apply for a loan modification. He said he did, and was denied twice.

At the end of last year, ACCE started organizing an event called National Reoccupy Your Home Day and invited him to participate, along with 30 other homeowners across the nation. With the help of ACCE and other groups, including Occupy LA, Occupy Riverside, Cuéntame, ReFund California, The New Bottom Line, Take Back the Land, SOUL, the Service Employees International Union and New York Communities for Change, Arturo De Los Santos began to fight back.

It wasn’t always like this. De Los Santos was born and raised in a small town near Corpus Christi, Texas, to a Mexican-American family that has lived there for generations. After high school, he volunteered for the Marine Corps, serving on an aircraft carrier based at the El Toro Air Station near Irvine. When he left in 1991, a friend told him about a job in a factory that manufactured parts for both military and commercial aircraft. De Los Santos got a job there, and has remained with the company for 21 years without interruption. He is now a supervisor, and he has a good income.

The problem started with the 2008 economic crisis. De Los Santos’ hours at work were scaled back from 65 per week to 40. He fell behind in his $1600 monthly mortgage payments.

In Jan. 2011, Cal-Western Reconveyance Corp, a company that «provides non-judicial foreclosure services to mortgage servicers,» transferred the house to Chase Home Finance, which in turn passed it to Freddie Mac for an undisclosed amount last April.

After the eviction, the family moved to an apartment in Santa Ana, Orange County. But on Dec. 6, 2011, “we re-occupied the house,” De Los Santos said.

They have been living there ever since. De Los Santos has resumed working overtime, enabling him to make the mortgage payments. He said he «begged» officials to meet with him and work out an agreement.

Francisco Perpely of Alpha One Group, a Riverside brokerage firm that took possession of the property on Freddie Mac’s behalf, told California City News Service that De Los Santos «knew what was going on and had an attorney, trying to get this resolved and have the foreclosure rescinded. The bank was more than helpful with him, trying to offer relocation assistance… It ended up going to court, and a judge issued a writ of possession.»

Freddie Mac spokesman Brad German told The Huffington Post in an email: «Mr. de los Santos was evaluated three times for a loan modification. He was determined to be ineligible because his documented income showed he earned enough to make an affordable payment without a modification. However, Mr. de los Santos hasn’t made a mortgage payment in more than 2-1/2 years. The foreclosure process was lawfully completed in November 2010 and the house was lawfully vacated and secured in July 2011. Consequently, the only way to reduce the losses Freddie Mac and taxpayers have taken on the unpaid mortgage is to re-secure the house and sell it to a new buyer.»

Freddie Mac asked a Riverside County Superior Court judge to order the family’s removal from the home. As De Los Santos awaited the decision, a team from Cuéntame, a civil rights organization affiliated with Brave New Foundation, filmed him and his family, in an attempt to publicize the family’s story.

«It was so emotional, the tension was building for an hour, he was stressed out, eating lunch, waiting for the call from the lawyers,» Daniel Dronsfeld, who produced the video, told The Huffington Post.

When the call came, the news wasn’t good.

But he won’t go, he says. And activists, who view this as a blatant case of injustice, will gather Tuesday morning to lend a hand.

«Anywhere between 30 and 40 people will be with him to express their support in a non-violent way,» Kuhns said. «We want to be present at the moment it will happen.»

«I’ve never been an activist [who took part] in protests,» De Los Santos said. But things have changed since he began fighting for his house. On Thursday, Feb. 16, he was arrested in the lobby of Freddie Mac’s offices in Los Angeles while attempting to negotiate. About 150 supporters were with him, according to KTLA.

De Los Santos will likely risk arrest again Tuesday morning. Surrounded by activists, he, his wife, and their four children — Brandon, 12; Sasha, 10; Kevin, 8; and Millie, 7 — will hope for the chance to pay for and keep their home, now owned by Freddie Mac.

The De Los Santos family is one of many Latino families hit hard by the foreclosure crisis. According to a November report by the Center for Responsible Lending, «Lost Ground, 2011: Disparities in Mortgage Lending and Foreclosures,» even though «the majority of people affected by foreclosures have been white families … borrowers of color are more than twice as likely to lose their home as white households.” One quarter of all Latino and African-American borrowers, the study says, «have lost their home to foreclosure or are seriously delinquent, compared to just under 12 % for white borrowers.”

Another study, «Foreclosure in California: A Crisis in Compliance,» published by the office of the Assessor-Recorder in San Francisco, «identified one or more irregularities» in 99 percent of the almost 400 cases examined. «In 84% of the loans, we identified what appear to be one or more clear violations of law,» the report said.

The New York Times said the report «contradicted the contentions of many banks that foreclosure improprieties did little harm because the borrowers were behind on their mortgages and should have been evicted anyway.»